Number One Back Training Must-Do

Pre-Contest: 14-Weeks to the Stage

Losing A Leg & Gaining Success: The Power of “I Can”

Look at one of your legs. I mean really look at it. Now, imagine waking up and not having that leg. Visualize it. Think about what your life would be like. How your life would change, how you would feel when you looked in the mirror. How friends, family and even strangers would treat you. Think about the things you love to do and if they’d still be possible. Feel the emotion and hold on to that feeling while I share an inspiring story about a man and his message of courage and determination.

Focused, determined and doing what I love – I was in the gym working out. I tend not to look around all that much because I’m there for a purpose, but this day was different. I glanced up and saw a guy with a prosthetic leg. Let’s face it; this is something that gets your attention, especially in a gym. But what kept my level of attention was his focus and laser-like determination. This guy not only knew what he was doing, but he was doing it with a level of intensity that I rarely see. I thought “More power to him,” and I quickly went back to business as usual.

Flash forward three weeks later to Sunday, May 27. I was asked by a friend to be her handler (someone who assists the lifter) at a powerlifting meet. As all the lifters prepared to compete, I noticed one competitor with a prosthesis who looked very similar to the person I saw several weeks earlier. Another attention grabber, this we don’t see often. I walked towards him, introduced myself and asked if he trains at Powerhouse Gym in West Palm Beach. He answered, “Yes I do. Good to meet your Raphael, I’m David Whitehead.” I spoke with David for only a few minutes that day but was inspired by him. I knew in my gut I had to write about David and that people needed to hear his story and his message.

I met with David on Saturday June 30, 2012. He shared his personal journey with me, and every moment listening to him was riveting. David’s words, his presence and his contagiously optimistic and powerful outlook made me feel fully alive, and I couldn’t help but think that everyone must have this same reaction when speaking with him.

In 1982 David was in a terrible motorcycle accident. His surgeons weren’t sure they could save one of his legs, but after hours in the operating room, they were successful. As the years passed however, David began experiencing pain in his leg. The pain continued to increase to such an extent that David required an aggressive pain management program. From 2001-2009 he required higher and higher dosages as the pain increased to an excruciating level. David eventually had to take in 275mg of morphine a day. “Just enough,” he said, “to make it through the work day in order to do it all over again. After awhile, even this stopped working.”

In 2009 doctors said that the only way he could remedy the extreme pain was amputation.

David felt he had come to the end of his rope and just couldn’t go on living in this manner. He also said that he just didn’t want his kids growing up watching him exist on pain medication, and that he’d rather lose his leg than have them grow up watching that. “I wanted to be a great role model for them, no matter what,” he said.

On March 6, 2009, David’s leg was amputated. From that point on, everything in David’s life would be different. Everything. Try to imagine that for just one moment.

Without his job and with the difficulty of just performing everyday tasks like getting dressed or using the bathroom, David struggled. For practically a year post-surgery, David was depressed and found himself contemplating his life and his personal value. He had always felt very much connected to his job as a fire sprinkler installer — it was something he loved and it required a lot of physical exertion. But even that was stripped from him. After the surgery he said, “I would just do things around the house, sit down, do something else around the house, sit around, etc.”

It was then, less than a year later, when David decided to do something. “I was sitting around, feeling like crap, I was even experiencing problems with my prosthetic. But finally after almost a full year, I thought that maybe I ought to just go to the gym. If nothing else, to at least see people.” So in January 2010, David got out and went to the gym. He did what he could, and he said he felt weak and that it wasn’t easy. But he did it anyway.

As fate would have it David met someone in the gym named Leo. Leo told David that for his soon-approaching 92nd birthday, he was going to give himself a birthday gift of bench pressing 225 pounds! Sure enough, Leo did it, and that level of inspiration kicked David’s workouts into a higher gear. 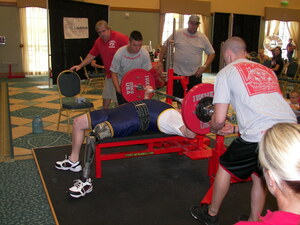 Time for more fate. David then met Larry Bucchioni at Powerhouse Gym, and Larry had a very rich history of competitive powerlifting, lots of coaching
experience and a mountain of knowledge. Larry spotted David’s strength potential and intensity and told David that he should consider a powerlifiting meet.

Drum roll please. On April 26, 2012, just a year after getting to the gym, David set three WNPF Florida State powerlifting records in his first-ever meet: a 285-pound Raw Bench Press record for the men’s 50-54 year old, 220-pound weight class, as well as the records for Power Curls and Bench for Reps. Then on May 27, the day he and I met, David set the USPA Florida State record for the 50-54-year old, 220-pound class Raw Bench Press. Here’s what David thinks of his achievement: “The best personal success is showing that an amputee is capable of these things. But if someone has a physical impairment or not and was to see me or hear of me and say to themselves “I can,” what could be better?”

David’s next meet is on July 14, where his goal is a 300-pound bench press and 155-pound power curl. In January 2013, David will begin deadlifting under Larry Bucchioni’s guidance.

In January 2010 David took control of his life by stepping into the gym. He’s now grabbing life and living it his way, on his terms. And it’s not just about powerlifting. Prior to his amputation, he said that being a fire sprinkler installer was his livelihood. He defined himself by his work and he felt “destroyed” when he couldn’t do it anymore. And then, with a beaming smile, David said, “But now I define myself by just being David. Just being me. I’m not defined by my work; I’m not defined by my powerlifting. I define myself as just being me.”

We always think that something like this is so far removed from us, that it could never happen to us. Then life has its way with us. But we don’t have to be victims. As we learn from David, life has something for us to learn and something for us to give back, and David has done both in spades.

To get more of a glimpse into David’s perspective and humility, he gave great praise and gratitude for his wife and family because they gave him the support, love and strength he needed. He also gives great praise to Florida O&P Services (which specializes in Orthotics and Prosthetics), where he is now employed, for being immensely supportive of his powerlifting pursuits.

He also told me, “Please don’t make the interview sound like I’m boastful or cocky, because that’s not me. I’m really not that special. I just want people to know that anything they really want to do, they can do it if they put the effort in.”

Every once in a great while, we meet a person who moves us in such a way and inspires us to such a degree that it helps not only to give us new perspective, but it makes us think about how we define ourselves and what we really and truly can accomplish in life.

For all the times you’ve defined yourself as a failure, or think and feel that you just can’t do something, whether it’s losing weight, starting an exercise program, pursuing a new career, or doing something your heart has always wanted to do, David’s message is that “you can.” That you’re stronger than you give yourself credit for, that you have to do the work and your life is waiting for you. That’s David Whitehead’s message. That’s the essence of it. 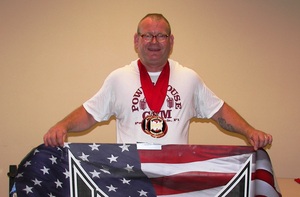