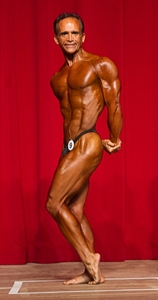 I didn’t begin my bodybuilding career until I was in my early 40’s. My first show was the Mr. Connecticut in 2001 where I won the open lightweight and the master’s over-40 classes, and went on to win the overall masters (over 40, 50 and 60 overall) as well. Quite a start to my bodybuilding journey!

That night I got hooked on competitive bodybuilding, and I’m still competing today at the age of 56. I have competed in 22 open weight class shows, won my open class pro card in two organizations and competed in 9 masters class shows. Most recently, I won the 2014 NPC Southern States Open Bantamweight class.

During my time on-stage, I’ve seen a substantial number of over-50 competitors who just don’t go into a show looking their very best. They may need to lose more fat or they may look flat, or for a host of other reasons they’re just a little off. That little bit can make all the difference when you’re on that stage.

It’s not that an over-50 competitor will necessarily train or even eat differently than anyone else, but I’ve walked this walk and I know what it’s really like when you might need an extra day off, when you should cut back the cardio, or when you need to adjust training. It could be like this for someone of any age, but I’m very tuned-in to the master’s competitor and particularly, the over-50 competitor.

Working with master’s level competitors is something I enjoy because I know there are guys out there who have a bodybuilding show on their bucket list. I know that feeling when you’re thinking, “I’ve always wanted to do a show.” If you are that guy, I encourage you to contact me so I can help you do this the right way.

If you’re tired of the way you’ve been looking in your shows or if competing in a show is something you’ve always wanted to do, then check out my services below, contact me at raphael@ripby.andalso.fyi and let’s start the process of getting you ready for that stage.