My goal in every show I’ve ever competed has been not only to do my best, but also to make continuous improvements. Early in my career, I got into the habit of always asking the judges what I need to work on to improve. Then, whether it’s a specific body part(s), symmetry or some other issue, as soon as the show is over, my mission is established. I even do this after shows where I win my class, such as the July 2014 NPC Southern States victory. 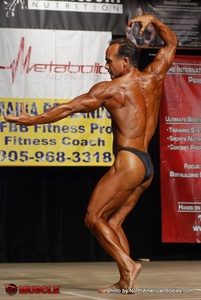 
2012 Florida Gold Cup – 1st Place Lightweights
Highlights: Very proud of this victory and held my own in the overall against the big boys.


Other:
2012 DFAC* World Championships – 6th place Pro Masters Class
Highlights: A respectable placement (12 in class) considering there was only one weight class.