When I began as an amateur, my goal was to win my open class WNBF pro card. I spent several years falling short of earning the card. I would place 2nd and 3rd quite often and it seemed like I would just miss show after show. Some friends mentioned that maybe I should quit, and the judges were biased. I refused to accept the “just quit” mentality. I did just the opposite. I trained harder, ate smarter, worked relentlessly on weak points and ultimately won my pro card in 2005 at the age of 48. 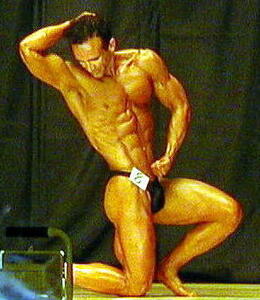 2004 Amateur World Championships – 1st Place Bantam Class
Highlights: In one of the biggest amateur shows of the year and in a class of 13 I took top honors.

2004 Naturalmania – 2nd Place Bantam Class, 2nd Place Masters Class
Highlights: Bantam Class placing came down to a 1point tie breaker. One judge told me he had me not only first in the class but was sure he would have given me the overall for the show.

2004 Hercules – 4th Place Bantam Class, 3rd Place Masters Class
Highlights: Came in too heavy. Got caught up in the size game and came in 10 pounds over my normal stage weight. I was lucky to escape with no lower than 4th. A great lesson learned on not getting caught up on weight. The judges do not have a scale on stage.

2003 NANBF USA Invitational – 2nd Place Short Class
Highlights: Due to small class sizes, classes had to be redistributed. A medium class contestant was moved into the short class and it became challenging to deal with his overall size, but it was still a very good class and highly competitive.

2003 Naturalmania – 2nd Place Bantam Class, 4th Place Masters Class
Highlights: Judges told me to work on back width. So after the show I went to work!

2003 Hercules – 3rd Place Masters Class, 3rd Place Bantam Weight Class
Highlights: First time competing in New York City: Outstanding competitors in both classes. Judges said that my legs looked amazing but I needed to bring up my upper body. After the show, I devised my strategy and put it into action in the gym and in the kitchen.

2001 Connecticut – 1st Place  Masters Class, 3rd Place Open Lightweight Class
Highlights: Best Poser in Class Award. This was my 3rd show of the year and I was losing steam, but I held my own and captured a 1st place Masters in a competitive class and was very proud of my best poser in class award.

2001 NBI NY State – 2nd Place Masters Class, 4th Place Open Short Class
Highlights: Truly an amazing short class. The winner of the class went on to become a consistent class winner in the WNBF: judges told me to work on my symmetry. I knew this would take time but it was now part of my plan.

2001 Mr. Connecticut  – 1st Place Open Short Class, 1st Place Masters Class
Highlights:  Overall Crowd Favorite Award. My first show and wow what a way to break into bodybuilding! I couldn’t even sleep that night. One of the most thrilling experiences I’ve ever had on stage.