Pre-Contest: A Challenging Road to The Stage

I was hoping to have an update sooner but things have been very hectic. In these photos, I’m two weeks out from the DFAC (Drug Free Athletes Coalition) World Championships in Miami on Nov 3.  And, four weeks out from the NPC Florida Gold Cup on Nov 17 in West Palm Beach.

The DFAC show has been getting a slew of excellent pros. In fact, a large team from the UK will be traveling to Miami for this show. The momentum for the show has been nothing short of electrifying. The promoters (Rich Fitter and Vicki McCann) are going all out on this and it’s creating a certain magic in the air. Anyone competing in this show knows exactly what I mean based on the DFAC Worlds Facebook posts. This will be my first DFAC show, and I have been extremely impressed with the attention given to competitors and by the flexibility of the promoters.  Another highlight was the glimpse of what the stage will most likely look like. Guy Addison will be handling the lighting and he is undoubtedly an expert in stage lighting and presentation. I have been blown away by what I’ve seen of his work in various photos from other shows. He is a master in creating a “wow!” effect.

As far as my conditioning, I’m not quite ready in the photos here. However, I will be ready for the stage. Sometimes I’m ready a little earlier than this and sometimes not, but the fact that I’ve lost an average of just under a pound a week since the start of my prep has proven itself to be quite valuable. I have not lost a lot of strength as many competitors do when they try to lose too much fat at too fast a rate. Patience and tenacity have to be combined in any contest prep and one must avoid panicking when behind on a prep.   In my opinion, that’s one of the things that separate a pro from an amateur. 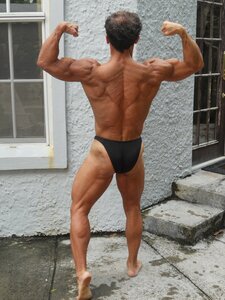 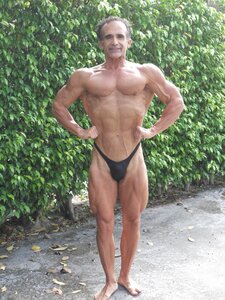 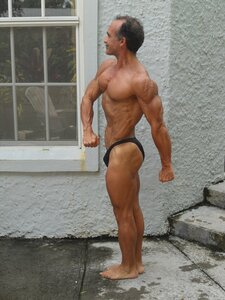 My training had been five days a week but about a month ago I shifted to four days a week, allowing for more recovery and a better look to my physique. It’s important to not get one dimensional in your approach to contest prep. Some years I’ve trained five days a week and two years ago I was averaging six days. It can all work, but you have to respect the present and what your body is responding to, and you can’t be afraid to shift gears when necessary.

Cardio has been two 20 min HIIT sessions a week and three 40-45 min steady state sessions. Plus, all the posing practice has to be taken into account. Make no mistake, it takes more than just your hard work in the gym to win the show. Stage presentation is an art and is essential. You can always tell who practiced their posing and who didn’t.

As far as food, my carbs cycle as low as 150gr and as high as 300gr. This has been very effective and has promoted steady loss.

My next post will be after the DFAC Worlds and I’ll give a complete recap. I’ll also discuss my plan for the NPC Florida Gold Cup.