First show in two years is on the books. I competed in the DFAC (Drug Free Athletes Coalition) World Championships on Nov 3, 2012. This was such a great show loaded with high energy and great camaraderie.  I competed in the Pro Masters class as opposed to the Pro Open class because there wasn’t a split by weight in either class. So in both cases (Masters and Open) I knew I would have been contending with competitors who were much heavier than me, but I reasoned that I had a better shot at placing well in the Masters class.

There were 12 amazing bodybuilders in the Pro Masters class. I was the lightest in the class at 132 pounds. I believe the heaviest guy in the class was 194, so you can see what I was up against. I held my own though. I came in 6th and according to an analysis of the class posted by the DFAC on Facebook, I narrowly missed making the top 5. I was in almost perfect condition, but I thought I lacked just a tad of the razor sharpness I’ve brought to the stage in the past. I’ll have that for the NPC Florida Gold Cup show On November 17th. In fact, I already have it as I write this post.

It was an absolutely outstanding pre-judging experience. I’m not precisely sure how long we were on stage but it had to have been about 30 minutes. We were worked hard, moved around a lot, and compared against one another in a relentless fashion. This is precisely what a competitor likes to experience on stage. After weeks and weeks of hard training and brutal dieting as if you’re the President of the Type A Personality OCD Club, the last thing you want is for pre-judging to last 5 minutes. We want our money’s worth, and we want to be worked into submission! Remember, we’re bodybuilders – were sort of crazy…in a good way.

You can see the photos as far as my stage-look and conditioning, but here is the analysis I received in the DFAC post on Facebook that I mentioned earlier (click each photo to enlarge):

Raphael has a great upper body and was very close to making top 5 very little in it. Raphael carries good muscle especially in his upper body and has a great taper. He was a little flat at pre judging but improved in the evening. Raphael could do with more sweep in his quads to match his flaring lats. 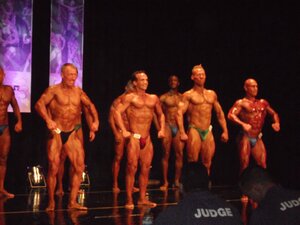 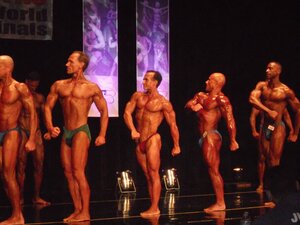 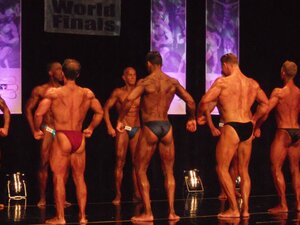 If anyone is looking for me to disagree or blast any of the analysis above or even my placing, it’s not going to happen.  I always take any analysis provided and do my best to improve on any weak areas. The competitors that complain after any type of comments by judges are amateurish in attitude. The pursuit of constant and never ending improvement is what I love about bodybuilding. I was grateful and impressed that the DFAC shared this information.

As far as the show itself, it was extremely well run, the stage looked simply amazing – maybe the best I’ve ever seen in a show where I’ve competed.  There was also fantastic camaraderie amongst competitors and the mood was super charged and electrifying. It was professionally run but had a feeling of fun and friendliness to it. Also, Vicki McCann was a sensational emcee. She was masterful at getting the crowd involved with lots of cheering. That’s one of the things an emcee is supposed to do at  a show, but I rarely see it. A highly impressive first year Worlds!

One of the highlights of the day was a conversation I had with co-founders of the DFAC, Rich Fitter and Vickie McCann.  Between the day and evening shows I was able to learn more about their philosophy and mission for the organization, how they are intently focused on this being a great experience for competitors, and how this will always be the first priority of the DFAC. That sums up the day and that sums up the DFAC.

Were there things that could have been improved? Yes, of course. There always are. However, they were very minor and not even worth posting. I didn’t intend this to be a rah rah DFAC post, but it really was a great and fun show. My prediction is that the organization will grow significantly in the next few years, and I also believe that the Pro Masters and Pro Open classes at the Worlds will grow to the extent that two and possibly three weight classes will be necessary by next year. They’ve indicated that once the class size reaches at least 15 they will do this.

As for me, now it’s time for the NPC Florida Gold Cup. I’m ready. Stay tuned for my summary of that show and my experience.