Fact #1– Training and dieting for a show require discipline and perseverance.

Fact#2 – Post-contest nutrition is just as important as your nutrition during contest prep, but…

Fact #3 – This is where many competitors fail. One week after a show we’ve got ourselves a bona fide Sumo wrestler- in-training. Bring on the food, the bloat and the fat, baby! 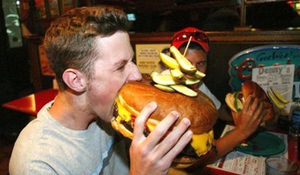 The hard training competitor has just begun the process of destroying everything he/she worked for and has just made their next contest prep that much harder.

When you start over-indulging after a show your body will start to gain fat at a fast and furious pace. Your months of hard dieting slowed the rate of your metabolism and your body is happy to oblige by storing enough winter fat for the next 8 years.

I competed in the NPC Southern States on July 12 and had one of my best stage appearances ever. I attribute that to staying very close to contest weight in my off-season, about 6-7 pounds away. This allowed me to eat a lot more food during my prep which made it easier to go into the show looking full, yet ripped. 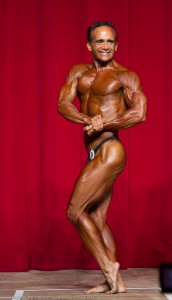 Here’s how I handled it between my last show in 2012 and the 2014 NPC Southern States, with step-by-step takeaways for your own off-season to follow:

As I move through my current off season (I’m currently about 4 weeks post-Southern States), I’m already at 210g protein, 375g carbs and 65g fat – close to 3,000 calories. I’ve used the same slow increase of food approach as I did after my 2012 show, but this time I can eat even more food! I’m still only 2.5 pounds above stage weight and will have to make another increase this week. I estimate that I will end up at about 210p-400c-80f, or close to it. Close to 3200 calories. This doesn’t even include a fun meal out that I have with my wife each week or any other social events.

Once I hit my goal weight I will have to tweak slightly downward to stay at maintenance but it won’t be much of a drop.

Takeaway #1– Stay within 6-7 pounds of stage weight (though some may need a bit higher). This is essential for anyone over the age of 50.
Takeaway #2 – Increase food (carbs, fat or both) very slowly week to week (10-20g increments) after a show and let your energy, the scale and the mirror be your guide.
Takeaway #3 – Keeping carbs as high as possible in prep will allow you to go in as full-looking as possible.
Takeaway #4 – More protein is not necessarily always the answer.

This approach will have you training with full intensity off season, keep you lean and set you up for a sensational contest prep and show. Plus, it’s a healthier approach than binging for days or weeks after a show .

Don’t just be a hard training competitor, be a smart one too!

If you have any questions, email me at raphael@ripby.andalso.fyi 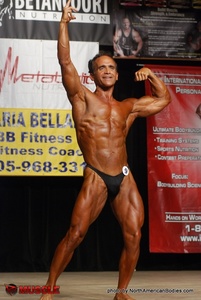